The Preservation of  Youth

For most men the prostate will eventually become a problem. The prostate is subject t o 3 types of problems: Benign Hypertrophy, Prostatitis (BPH), and Prostate Cancer. The statistics are terrible. The National Association of Continence estimates that there are approximately 19 million men symptomatic with BPH, 14 million undiagnosed and 2 million who are diagnosed but untreated. Approximately 50% of men experience symptoms of BPH by the age of 60 and 90% by age 85. With cancer it is also  grim. The American Cancer Society estimates 1 in 6 men will be diagnosed with prostate cancer during his lifetime. Each year 192,280 new cases will be diagnosed and 27,360 will die of the disease. I believe almost all of this is unnecessary.

The prostate is a small golf-ball sized gland near the pelvic floor. The ureter from the bladder goes right through the prostate and this is the rub. When it becomes enlarged it squeezes the ureter and urination becomes a problem. The main symptoms are uninary frequency and urgency, nocturia, weak flow and incomplete bladder emptying. 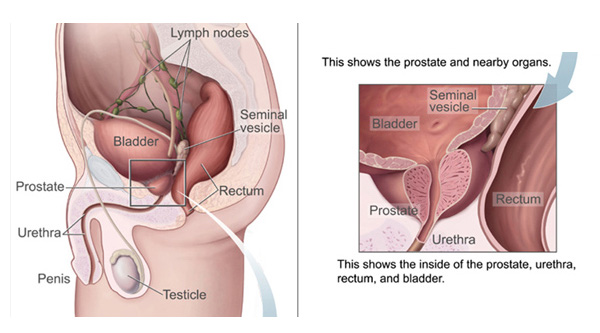 Often an enlarged prostate can be palpated with rectal exam. When the prostate swells it releases an antigen called Prostate Specific Antigen (PSA).  The PSA rises with benign enlargement, but also with Prostate Cancer, so this test is not specific.  The nature of the swelling needs to be determined, perhaps with biopsy or an MRI, then the PSA can be used to monitor the success of the therapy applied to the problem. Traditionally this should range below 4, but testing with biopsys as revealed that some cancers are present with values below this. What this tells us is that there is no statistical norm for PSA, but monitoring changes in its value may provide information on the course of therapy. Because of this, the test is probably best used by testing to establish a baseline, then retesting for change in value.

The dominant theory is that this benign swelling is caused by dihydro-testosterone (DHT), the hyperactive brother of testosterone.  Because of this, most approaches are directed at reducing the production of DHT. There are a number of herbs that influence this, but the king is Saw Palmento. Research shows that this herb does work. Others include Nettles Root, Beta Sitosterol and Pygeum Africanum. Many times they are used in combination. The drug companies have produced a host of products for this condition including Flomax, Avodart, Uroxatral, Proscar, Finesteride, and Cadura. These all have side effects. It is much better to fix what is wrong than take drugs to suppress the symptoms.

In our clinic we rarely use either Saw Palmento or other DHT suppressing herbs to correct this problem. It is worth keeping in mind that this problem was not created by a lack to these herbs. The prostate is a sexual organ and generally likes stimulation from sexual hormones. There is evidence that withdrawing sexual stimulation from the prostate causes problems. We first focus on how this organ processes sexual hormones, such as DHT, as well as its nutritional needs. In most cases the prostate will spontaneously shrink by identifying missing nutrients and replacing them. These include supplements such as DHEA, Progesterone, Zinc, Vit.D3, Co Enzyme Q-10, Vit. E (particularly Tocotrienols), Alpha Lipoic Acid, Vit. C and essential oils. Occasionally there is also signs of subclinical infection which must be responded to. Most cases seem to clear in 2 to 4 weeks without using any drugs. This is even true with some patients that have been on drugs for years.

The prostate secretes sugar to feed sperm on their journey. Just as Diabetics are prone to infection as their bodies are full of sugar, so is the prostate. When the prostate becomes infected it swells and becomes painful. Every infection you can imagine can infect the prostate and often there is more than one. Severe infections need medical help, but subclinical infections are responsive to gentle treatments with herbs and supplements. The specific herbs need to be tailored to the type of infection present, but once it is identified most respond easily.

Cancer is always a medical concern. However, most current medical treatments are drastic and can lead to impotence. Patients with this condition should consider alternative cancer treatments, many of which are not available in this country. Information on this is available from the Cancer Control Society. See also our section on cancer. Also see this section for cancer prevention.