Many of the most common, as well as the most painful symptoms of spinal pain that are experienced, come from the intervertebral discs. The intervertebral discs are the pads that are lodged between spinal vertebrae. They have a jelly-like center called the Nucleus Pulposis, and a fibrous outer layer called the Annulus Fibrosis. The vertebrae are structured so that the canal that holds the spinal cord is immediately posterior to the disc and vertebral body, and the spinal nerves exit along side the disc. Although there is a ligament that runs the length of the spinal canal forming a barrier between the discs and the spinal chord, it forms only a partial protection for the spinal chord and its nerves. The nervous system is vulnerable to weakening of the disc that extends backward towards the nerves. The phenomena that causes the most severe symptoms in the spine is a bulging or rupturing of the posterior aspect of the disc in which it comes into contact with either the spinal chord or the exiting spinal nerves. Anterior weakness of the disc causes much less severe symptoms or none at all. The nuclear material in the center of the disc finds weakness in the outer fibrous capsule of the disc and begins to work itself towards the exterior. This process is called a disc protrusion and can cause a disc bulge. If the nuclear material ruptures out of the disc it is called an extrusion, and is a more serious condition. 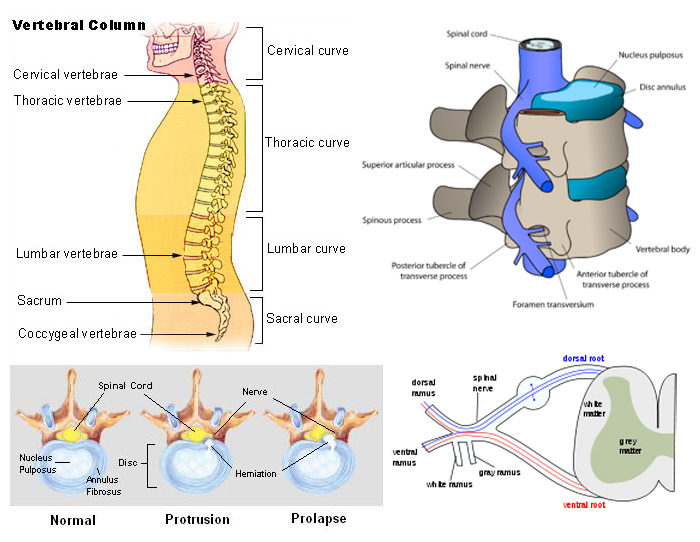 There is a wide range of terminology to describe the condition of the intervertebral disc in a state of collapse. These range from the popular and misleading term ‘slipped disc’, to others including disc protrusion, prolapsed disc, bulging disc, ruptured disc, herniated disc, disc disease, disc degeneration, degenerate disc disease, and black disc. 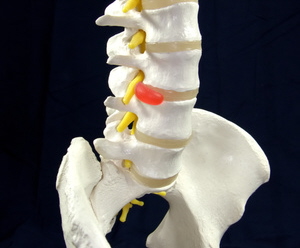 The symptoms resulting from either a protrusion or an extrusion can range from mild back pain, paresthesias (odd sensations and tingling) to numbness and loss of motor function. The particular symptoms depend on which spinal level the disc problem occurs. In the low back they often cause pain down the posterior leg called sciatica. Any nerve pain from a disc weakness is referred to as a radicular neuralgia.

There are many options for treating disc problems. Chiropractic deals only with non-surgical, non-drug solutions. However, in most cases these are also the best options. For simple protrusions and disc bulges Chiropractic is the safest and most effective treatment. In milder cases research has shown spinal manipulation to be an effective treatment. (See the section on this site for Chiropractic Research.) This involves repeated manipulations that take the stress off the disc and restore proper motion. The disc will usually heal.

Nuclear extrusions, where the nuclear material has exited the disc, come in 2 varieties; attached extrusions and detached extrusions. In the former case the nuclear material is still attached and continuous with the material inside the disc. These are usually responsive to Chiropractic care. In the case of a detached extrusion it has broken away and may float freely down the spinal canal causing much nerve irritation. In the case of a detached extrusion that is producing severe symptoms surgery may be the best option and is best dealt with by a medical orthopedist. For smaller extrusion some form of non-surgical decompression will usually do the job (see section on DRX 9000 C). This is a very gentle treatment often putting patients to sleep. Another option is the use of a Flexion Traction Table that allows the doctor to gently traction the injured disc. Sometimes both treatments are indicated. We can design a program using these modalities and physical therapy that will bring the best results. Nearly all patients recover.