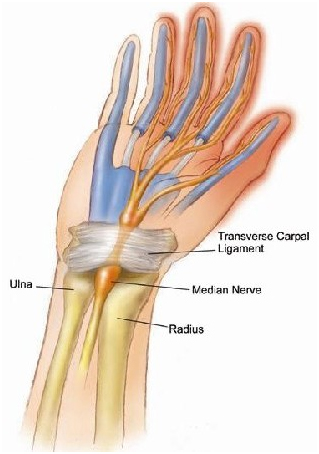 There are several problems with this approach. First, common sense will tell you that cutting the transverse ligament will leave the structure of the wrist in a weakened condition. Secondly, this approach does not really address the reason for the compression in the first place, only relieving the symptoms by taking pressure off the nerve. Thirdly, most of these problems can be resolve easily with conservative care, making surgical intervention an outdated and unnecessary procedure. Also, keep in mind, that surgery does not always work (11)(12)(13)(14)(24). In addition, conservative care, which I will describe, is far cheaper than surgery. The usual routine of sending the patient for 6 weeks of physical therapy followed by wrist surgery is a tremendous waste of money.

I am going to make a bold statement – In most cases carpal tunnel is an understood and resolvable problem with chiropractic care. While there is an ongoing debate in the research literature about which surgery is best (2)(13), when surgery should be performed (3), weather surgery is better than conservative care (4)(16)(5)(25), or what the exact nature of the injury is, I believe the easy solution to this problem can be demonstrated to any reasonable person in a very short time. In our office we can greatly improve or resolve most of these problems in 1 to 5 visits.

There are some that take much more, but there are usually reasons for it. The more damaged and inflamed the tissues, the longer it takes to heal. If the muscles in the arm have become hardened and fibrotic, it will take time to rehabilitate them. But heal it will once the conditions are set for it to happen. It has been proposed that the best candidates for surgery are young patients with symptoms presenting for less than 1 year (3). In our opinion these individuals are not candidates for surgery at all and are the easiest to fix with chiropractic technology.

To describe why traditional medical solutions to this problem are inappropriate, let me start by saying that the entire field of healing is undergoing a transition from the “old medicine” to the “new medicine”. Old medicine is the practice of describing a body disturbance with a ‘diagnosis’ and coming up with a solution to the diagnosis in the form of a prescription, weather it be a drug, physical therapy or whatever. New medicine is the practice of uncovering malfunctions in various systems of the body which produce the imbalances and breakdowns we call disease. There are usually many factors involved, not one. These are treated by correcting the malfunctions. There is no absolute line between these 2 approaches, but the general strategic differences between them are like night and day. This new approach is called Functional Medicine.

The traditional approach to Carpal Tunnel is to regard it as primarily a wrist problem and many orthopedists still treat it as such. There have been various studies which have offered convincing ideas and data that contradict this. In 1973 Upton & McComas (3)(18)(26)(27) presented the theory that of the ‘double crush syndrome’, the idea that a nerve could be interfered with at more than one location along its course, with each interference

causing a sub-clinical disturbance. The effects of each disturbance are additive. This means that each interference, by itself, would not cause a problem, but both together would. These interference block what is called axoplasmic flow, the migration of substances down the length of the nerve. Nerves feed tissues, they
don’t just stimulate muscle contraction. Without proper nerve innervation, joints and other tissues will degenerate. While this idea is still debated in the literature, there is considerable evidence supporting it (3)(6)(9)(18)(20). I am personally sold on this idea. This ‘double crush’ idea lays the foundation for understanding the non-local causes of carpal tunnel.

But there is more to the story. Other researchers have noted that carpal tunnel symptoms are part of a general syndrome of the upper extremities (1)(9) (12)(17)(19)(21)(22)(24)(26). Systemic metabolic problems such as diabetes (27) or postural misalignments of the shoulders and head (19) have also been determined to be factors. It takes little imagination to realize that this list will be extended as research continues. To get straight to the bottom line, carpal tunnel is one of the symptoms of general neck/shoulder/arm dysfunction, and often including systemic factors such as inflammation, and should be addressed by correcting the entire malfunction. In our experience it is not unusual to address perhaps 20 or more disturbances to allow the upper extremity to function properly and carpal tunnel to resolve. Many can be corrected in a few seconds. Some take more time. But an amazing amount can be done in 20 to 30 minutes of treatment. It is also worth noting that the same techniques that work on carpal tunnel also work on other related problems such as tendonitis, shoulder pain, tennis elbow and myofascial pain in the upper extremities. In fact, it is not uncommon to have to resolve these issues as part of the carpal tunnel solution.

Although not fully appreciated by most insurance companies, or the medical field, much of the effective technology for addressing this problem as been developed within the Chiropractic field. Building on the earlier work of Ida Rolf PhD, sophisticated understanding and techniques for correcting the myofascial aspects of this problem have been developed by Michael Leahy DC, and presented as Active Release Technique (ART). In a recent seminar he stated that he had been able to reduce medical costs in 30 corporations by 80% using ART. Diagnostic, neuro-muscular and nutritional considerations have been highly evolved by George Goodheart DC and his associates within the field of Applied Kenisiology. Traditional chiropractic manipulation of the spine and extremities can play a significant roll where appropriate (5) (7)(16). There is also a roll for physical therapy, stress reduction, exercise and proper training in use of the body (4)(16). In most cases, carpal tunnel involves only short term care.